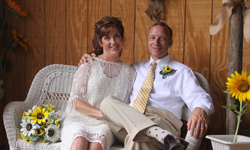 When I gave my life to the Lord on February 15 1995, it was something that I never experienced before.  I met the love I was searching for.  I made a few vows to the Lord to show my personal dedication to serve Him.  One of the pacts I made with the Lord was not to get involved in a relationship with a woman until He gave me the woman He has for me.

Over the course of about 15 years, I very rarely dated.  I went out with friends or in groups from church.  I met many godly woman, but I always asked the Lord what He wanted to do.  On one occasion I was on a worship team with a very anointed woman who shared a lot of interests.  I went to prayer and the Lord said ‘you can have her as your wife if you want’.  To me that did not mean that was the woman God had for me only that I can marry her if I wanted.  To me it also meant that this particular person may not have been the fullness of God’s blessing.

For a few years later I started to get out more and met more woman.  But with each lunch or coffee I did not feel God’s peace over any of the meet & greets.

Then the Lord called me to Pikeville, TN.  In a small town there wasn’t much of a choice to pursue a relationship.  But then when I least expected it, I met a beautiful godly woman while teaching a financial class at my church.

Over the course of about a year we spent time together and became friends.  At first I never thought about marrying her only to get to know her and spend time together.  I asked the Lord many times about His plan for Leslie and myself.  I had even prayed about asking her to marry me, but the Lord did not give me the release to do so.

In March of 2014 I was on a road trip to Florida.  On the way home the Lord showed me some strongholds that I needed to go after.  There was a lie of fear of being with the wrong person.  Most everyone in my family has been married at least once and divorced.  Fear kept me from being with the right person.

Once I took authority of the stronghold and commanded it to leave, I felt more peace about my friendship with Leslie then ever before.  Over the next few days I had asked her some serious questions about relationships.  I even took her to a peice of property I had my heart set on to build a house.  I was actually planning to build the house ‘in faith’ that the Lord would provide a godly bride.

On the last Sunday in March, I woke up with so much peace and joy.  In my prayer time before church the Lord spoke to me and said, ‘do not be afraid to take Leslie as your wife’.  So that morning after church, without an engagement ring, I asked her to marry me in the Wendy’s parking lot!

During the engagement time God had worked everything out; the wedding plans, the rings.  We asked Pastor Dale Bird Sr. to do the wedding so we made a few trips to Crestwood, KY for our marriage counseling.  We had some stressful times putting the wedding together, but it was worth it.

For the past 5 weeks with my wife, I know God is working on me and working on her.  I see her weaknesses and as her friend and her husband it is not my job to point them out, only to hold her up and lead her to God’s grace.  Leslie has seen my weaknesses and God uses her to build me up and encouragement frequently.  I am sure I write more about the life lessons of being married to my best friend!

I share this testimony not only to share my joy of God blessing me with the love of my life, but encourage many single men out there stuggling with ‘finding the right woman’.

James 1:17 says ‘Every good thing given and every perfect gift isfrom above, coming down from the Father of lights, with whom there is no variation or[r]shifting shadow.’

In the passages before James leads with ‘if any of you lacks wisdom, let him ask of God’ (v5) then ‘For that man ought not to expect that he will receive anything from the Lord,8 being a double-minded man, unstable in all his ways’ (v7).  Then James goes on to read ‘Blessed is a man who perseveres under trial..’ (v12).

As men we face many tempations and trials.  We need to understand that satan uses the same tactics over and over; the lust of the flesh, the lust of the eyes and the boastful pride of life.

How many bad relationships have you seen or been a part of?  I have seen too many for me to count, even in the church.  I have seen many young men get hurt when they realize the relationship they are in is not of God.  My encouragement is to prayerfully consider the relationship you in.  If not then seek the Lord to prepare you to be a husband, to be a responsible godly man.

Trust in the Lord with your whole heart
and do not lean upon your own understanding.
In all your ways acknowledge (make Him known) Him and
He will make your paths straight.
Proverbs 3:5-6